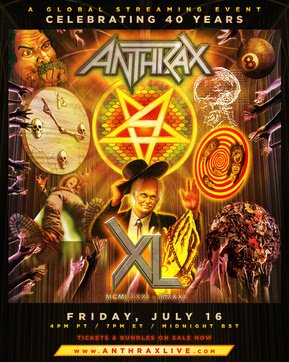 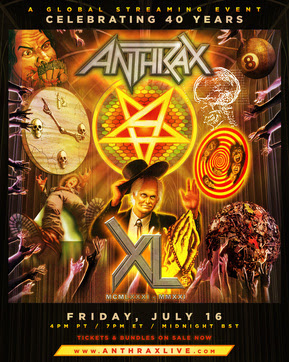 COUNTING DOWN TO ANTHRAX’S 40TH ANNIVERSARY…

TICKETS FOR THE BAND’S LIVESTREAM EVENT

NEW YORK, NY – (Thursday, June 3, 2021) – The countdown to July 18, the 40th anniversary of thrash/metal legends Anthrax, is well underway and heading towards the big finale. A special worldwide Livestream event, presented by Danny Wimmer Presents and originating from Los Angeles, will kick off in North America on Friday, July 16, beginning at 4 PM PT and 7 PM ET, and in the UK on Saturday, July 17, starting at Midnight BST. (Check out the trailer HERE.) Livestream event tickets and special 40th anniversary ticket bundles – one including a live video chat with the members of Anthrax – are on sale now.  Special 40th anniversary artwork was created by Brian Ewing and Stephen Thompson for limited edition t-shirts, commemorative tickets, and an anniversary poster.  In addition to the Livestream and merchandise bundles, fans will be able to buy a digital ticket to relive the past 40 years with exclusive interviews, testimonials, and behind-the-scenes stories of the band’s legendary career. All purchasing details are accessible at www.anthraxlive.com

The Global Livestream event, debuting July 16/17 (depending on your global location), will remain available to fans worldwide to tune in through July 25 at 11:59 PM ET via video on demand.  The band – Joey Belladonna/vocalist, Scott Ian/rhythm guitar, Frank Bello/bass, Charlie Benante/drums, and Jon Donais/guitar – will perform an extensive set of hits and deep cuts that will pull from the band’s entire catalog.

“I was a 17-year-old metal-head kid from Queens when I started this band,” said Scott Ian.  “I am a 57-year-old metal-head kid from Queens about to celebrate the 40th anniversary of this band. That means for 40 years, I’ve gotten to do exactly what I’ve wanted to do – and getting to do what I love and being a part of something so much bigger than myself has made the time, the unbelievable weight of 40 seems so light.   It’s been an amazing story so far, and I see 40 as a milestone that absolutely should be recognized and celebrated. Congratulations to us! I also see 40 as a stepping stone to the next chapter of Anthrax – we still have a lot to say and some killer riffs to unleash.  I’m not going to say, “Here’s to 40 more” because nobody wants to see that (I’d be 97). How about, “Here’s to at least ten more, and we’ll go from there! Thank you for enabling me, my friends.”

ABOUT ANTHRAX:  Twenty-twenty-one marks Anthrax’s 40th anniversary, during which time the band has released 11 studio albums, been awarded multiple Gold and Platinum certifications, six Grammy nominations, and a host of other accolades from the media, the music industry, and fans.  In 1991, the band helped break down race and genre barriers when they collaborated with Public Enemy on the track “Bring The Noise,” and was the first metal band to have its music heard on Mars when NASA played “Got The Time” to wake up the Mars Rover in 2012.  Along with Metallica, Slayer, and Megadeth, Anthrax is a card-carrying member of The Big Four, the four bands that defined the speed/thrash/metal genre. Anthrax has also introduced a series now sold-out signature whiskeys and bourbons and partnered with the Stockholm-based NEZUMI Studios for a high-end, limited-edition Baleine dive watch. Twenty-twenty-one will see the release of Z2 Comics’ “Among the Living” graphic novel with a track-by-track storyline inspired by Anthrax’s iconic 1987 album, Among The Living.  The book pulls together a “who’s who” of names from the worlds of comics and music who created “bubble dialogue” and original artwork to express what the songs meant to them. Taking advantage of COVID-19’s prohibition of concert touring, the band has been hard at work writing the next Anthrax album. 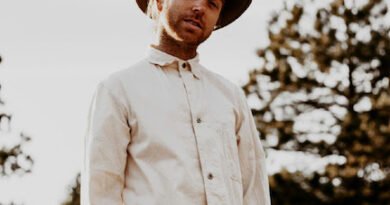 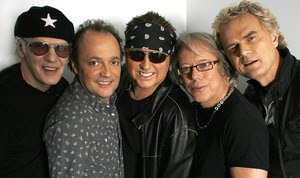 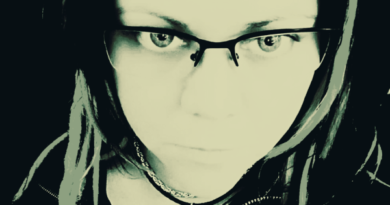 It’s The Janitors vs. The Bad Guys in August Burns Red’s “Bloodletter” Video

30th June 2021 Rob Cella Comments Off on It’s The Janitors vs. The Bad Guys in August Burns Red’s “Bloodletter” Video