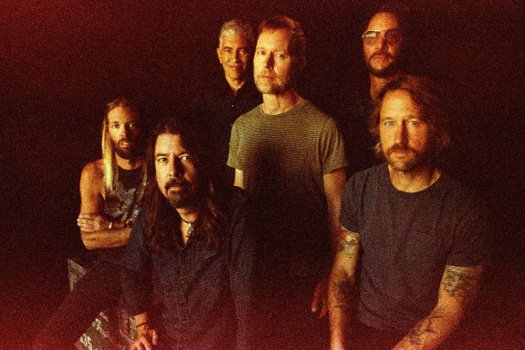 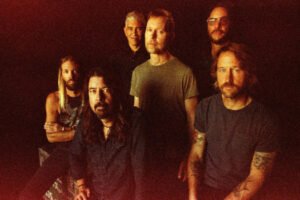 Foo Fighters are taking literally no time to bask in the ecstatic reception to their November 7 Saturday Night Live debut performance of “Shame Shame,” the first taste of the 10th FF album, Medicine at Midnight, due out February 5, 2021 on Roswell Records/RCA Records—well, maybe a few seconds, after all Entertainment Weekly did call it a “hypnotic earworm,” Stereogum lauded its “refreshing twist on their signature sound,” and Billboard noted “a groovy, sexy beat”… and that’s quite enough of that because…

On Saturday, November 14th at 5pm Pacific Time, Foo Fighters will be regrouping to mount a full on rock invasion of your living room, when they play a full set streamed live from the Roxy in Hollywood for any and all who buy a ticket for $15 at http://foofighters.co/Roxy. If you can’t be in front of a TV, tablet, phone, laptop etc. at exactly that time, don’t worry: Ticket buyers will have access to replay the full stream for 48 hours from the start of the show. And if that’s not enough… Limited event merchandise will be available at https://shop.foofighters.com/.

Foo Fighters’ Roxy streaming concert event is brought to you in part by the good people at Coors Light, and will feature innovative new technology custom created for this one of a kind Foo Fighters show: Beer’s Eye View. For 25 years, Coors Light has been on stage – and in hand – with Foo Fighters. Now for the first time, Beer’s Eye View will take fans behind the scenes backstage, into the thick of the action onstage, and to the best seat in the house (the VIB a/k/a Very Important Beer section)—all from the unique perspective of a live “Can Cam” attached to Dave’s own Coors Light.

In other boundary breaking Foo Fighters visual news, the official video for “Shame Shame” was directed by Paola Kudacki and co-stars Dave Grohl and Sofia Boutella. “Shame Shame” renders in stunning black and white an interpretation of a recurring dream that’s haunted Grohl since his childhood days.

Medicine at Midnight is available for preorder at http://foofighters.co/MAM with exclusive configurations including a purple smoke vinyl available only through the band’s online store and an indie retail-only blue vinyl, and more to be announced.

A portion of proceeds from Foo Fighters’ Roxy streaming show will go to Sweet Relief. Founded in 1993 by Victoria Williams, Sweet Relief Musicians Fund provides financial assistance to all types of career musicians and music industry workers who are struggling to make ends meet while facing illness, disability, or age-related problems. Sweet Relief is providing immediate assistance to anyone in the music industry who has been financially impacted by COVID-19. Applications are being accepted now, please apply for help or DONATE if you can at SweetRelief.org. 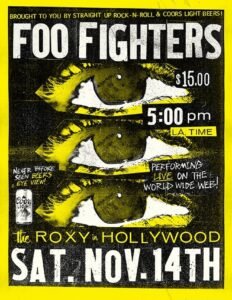 Coors Brewing Company was founded in 1873 by Adolph Coors, who chose the Clear Creek Valley in Golden, CO, for his new brewery because of the pure water in the nearby Rocky Mountain springs. The brewery’s original and most enduring beer is Coors Banquet, still brewed exclusively in Golden using only Rocky Mountain water and high-country barley. Coors Light was introduced in 1978 and now is the second-best-selling beer in the United States. Triple-filtered smooth Keystone Light is one the country’s most popular economy beers. NoCap, the brainchild of Roxy Theater co-owner and musician Cisco Adler along with an all-star list of partners in the music and tech industries, is both a platform and promoter of venue-based livestream concerts giving fans around the world access to intimate live performances with unlimited capacity.

With its easy-to-use text-based ticketing technology and custom concert streaming solution, NoCap is providing a much-needed lifeline for artists, crews and venues suffering during the Covid-19 pandemic that will remain a viable outlet post pandemic while becoming the new general admission creating unlimited profit potential for a new live music model. NoCap gives fans globally a chance to experience live shows by top-tier talent in storied venues, including The Roxy (Los Angeles), Belly Up (Solana Beach, CA/Aspen, CO), SOhO (Santa Barbara), Sony Theatre ( NYC ) and even Drive-In Concert Venues across the country , from home or on the go with visually stunning concert-quality sound, creating unforgettable performances.

Watch the video for “Shame Shame”: 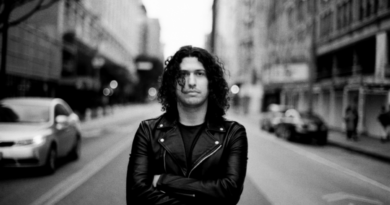 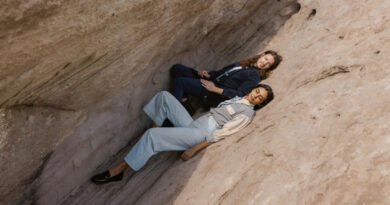 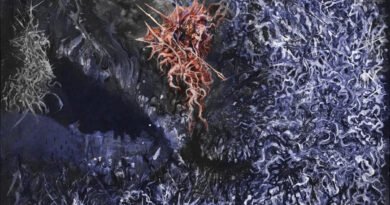 Here is the Psycho Village’s Newest Album Unstoppable will be released on April 17, 2020.

14th April 2020 Rob Cella Comments Off on Here is the Psycho Village’s Newest Album Unstoppable will be released on April 17, 2020.

24th November 2020 Rob Cella Comments Off on Ziggy Marley Teams Up with Gibson Generation Group (G3) and Music Students Across the Globe for Inspiring Talk, Out Today