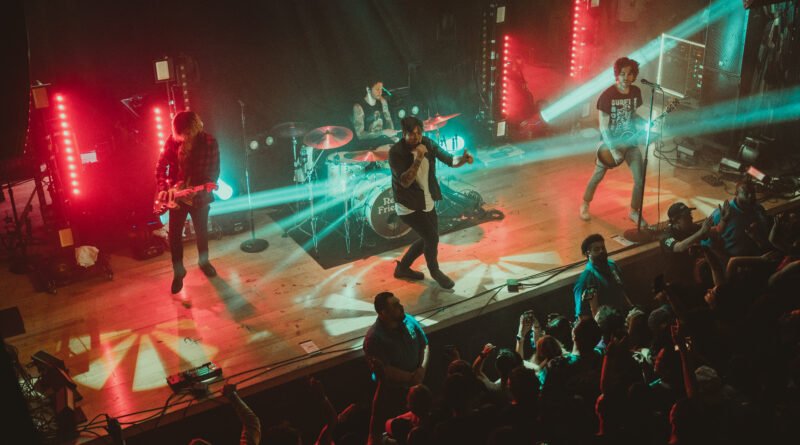 Last week in an epic multi-room setup, 8 bands gathered for a musical takeover of the House of Blues in San Diego, California. Two tours collided to form one larger show, with headliners performing on the House of Blues’ main stage and openers in the intimate Voodoo Room next door. One tour included Real Friends and With Confidence with special guests Taylor Acorn and The Home Team, while the other was Four Year Strong and Knuckle Puck featuring Microwave and Youth Fountain. With two stages and staggered set times, a fun – and chaotic – mini festival ensued.

With an early start time of 4:30pm, Pennsylvania native Taylor Acorn kicked things off in the Voodoo Room. Channeling Avril Lavigne with cargo pants, a thick black belt, and pink streaks of hair framing her face, she delivered clean vocals and punk rock energy to the crowd. Acorn’s vocals were featured on Arrows In Action’s song “Uncomfortably Numb” earlier this year; the song now has over 10 Million streams on Spotify and has gained viral popularity on TikTok. Her setlist included a number of tracks from past EPs, plus her latest release, single “Wishing You Hell.”

Setlist:
Wishing You Hell
I Think I’m in Love
Certified Depressant
Jamie All Over (Mayday Parade cover)
In My Head
Psycho
Shapeshifting

Also in the Voodoo Room was The Home Team, a 4-piece band from Seattle, WA. Lead singer Brian Butcher was all smiles and feeding off the positive energy of the crowd. The venue is modest with a capacity of only 150 people, though the band played with a passion as if it were a sold out stadium. The other members of the band include John Baran (guitar), Ryne Olson (bass), and Daniel Matson (drums). They delivered several jumps and high kicks, with the guitarist even rocking crocs and a camouflage hat.

Setlist:
Right Through Me
Move It or Lose It
She’s Quiet
Fashion Forward
Scary Movies
FOMO (Bored Of You)
Watching All Your Friends Get Rich

Next up was Youth Fountain, an emo/pop punk band from Vancouver, Canada. The band, who has been around since 2013 under the name Bedroom Talk, is made up of founding member and vocalist Tyler Zanon with touring members guitarist Cory Wells and drummer Brandyn Evans. During their song “Century” from the 2021 album Keepsakes & Reminders, mosh pits formed in the packed venue. The audience continued to bring their intense energy as Zanon introduced the next song, a recent release called “Birthright,” which was met with cheers from fans in the front row. With a hardcore sound and fast tempos, Youth Fountain kept the crowd hyped up for a long evening of fun and pop punk music.

Back in the main venue, With Confidence was preparing to take the stage as the first headliner of the night. After 10 years as a band, this would be one of their final live shows as part of their farewell tour. The Sydney-based Australian band consists of Jayden Seeley (lead vocals, bass), Inigo Del Carmen (guitar, backing vocals), Joshua Brozzesi (drums) and Scotty Mac (guitar). The room started to fill in leading up to their set. It was reminiscent of Warped Tour, with alternative music fans sitting on staircases throughout the room, waiting in line for drinks, and scoping out the perfect spot to stand for the show. Just after 6pm, the band walked out into a room of screaming fans. In the middle of their second song, a bouquet of wilted roses was thrown on stage. Their setlist included a variety of songs from across their discography, some of the most popular being “Voldemort,” “Moving Boxes,” and “Here For Nothing.”

Promptly at 7pm, Microwave rounded out the four opening bands that played the Voodoo Room stage. Microwave is a rock band from Atlanta, Georgia and formed in 2012. Members include Nathan Hardy (lead vocals, guitar), brothers Tyler Hill (bass) and Travis Hill (guitar), and Timothy “Tito” Pittard (drums). The four piece has released four studio albums and several EPs and singles in their decade-long history. Their energetic stage presence and fierce hardcore sound was a great way to finish the lineup of openers. Soon the full crowd would be released into the main House of Blues room for the rest of the night.

The crowd settled into the main room for the reminder of the show. Some fans had been going back and forth from Stage A to Stage B to catch all of their favorite bands’ sets, while others staked out their barricade spot all evening. There was surprising enthusiasm from the audience when Shania Twain’s “Man! I Feel Like A Woman” played over the speakers as the stage crew set up for the next band. It actually played twice, and each time was met with dancing fans and singalongs.

Knuckle Puck took the stage around 7:45pm, their set filled with crowd surfing, red stage lighting, and a condensed setlist due to the unusual 8-band lineup. Lead singer Joe Taylor mentioned the two tours combining and how this was a unique show that no one else would get to see. Rounding out the band was Kevin Maida (lead guitar), John Siorek (drums), Nick Casasanto (rhythm guitar), and Ryan Rumchaks (bass). The Chicago-based band began their set with a popular song from their repertoire, “Untitled” off of their 2015 album Copacetic. Fans throughout the room screamed out the opening lyrics and pounded their fists in the air, cell phones held up and recording to capture the emotional moment. Security guards struggled to keep up with all of the crowd surfers, running back and forth in the pit to catch them all.

Setlist:
Untitled
Gone
Tune You Out
Want Me Around
Groundhog Day
No Good
Disdain
Pretense

Real Friends was next on the lineup and was welcomed by an eager crowd – arguably the most excitement seen all evening. With an established fanbase since the band’s formation in 2010, Real Friends mutually parted ways with their original lead singer, Dan Lambton in 2020. The current lead singer, Cody Muraro, joined the lineup after previously being a founding member and vocalist of Youth Fountain – must have been an interesting reunion to share a show with his former bandmate! Searchlight-style light illuminated every corner of the venue from the floor to the balcony seating. Muraro had the most movement of any singer that night, constantly dancing and running from end to end of the stage.

About two thirds of the way through their set, the band paused due to the apparent injury of a concertgoer. The house lights came on, and several security guards and House of Blues staff members surrounded someone who was brought forward and lying down in the media pit. The band waited in the wings and after a lengthy intermission, returned to the stage apologetically. They expressed the importance of crowd safety and while their set was cut short, played one final song titled “From The Outside.”

Setlist:
Tell Me You’re Sorry
Me First
Get By
Mess
Storyteller
Late Nights in My Car
I Don’t Love You Anymore
Nervous Wreck
From The Outside

Stage crew members then set up for the final band of the night, decorating the amps and drum kit platform with human-sized decorative skulls and spider web textured fabric. Cables wrapped around the speakers to resemble the roots of a tree or lightning strikes. The venue smelled heavily of burning incense and fog machine smoke. Finally at nearly 10pm, the lights dimmed for the final time. The roar of the crowd grew as Four Year Strong stepped onto the stage. The four piece pop punk band from Worcester, Massachusetts is made up of Alan Day and Dan O’Connor (lead vocals, guitar, keyboard, programming), Jake Massucco (drums), and Joe Weiss (bass). Since forming in 2001 the group has released several albums; this tour was dedicated to their third full-length album, Enemy Of The World (2010). The band played a 17-song setlist with titles spanning their seven studio albums. Among the most popular were “We All Float Down Here” and “Heroes Get Remembered, Legends Never Die.” Fans moshed along and crowd surfed, some even bringing their children and family to watch the show.

Setlist:
It Must Really Suck to Be Four Year Strong Right Now
Tonight We Feel Alive (On a Saturday)
Nineteen With Neck Tatz
Find My Way Back
What the Hell Is a Gigawatt?
One Step at a Time
This Body Pays the Bill$
Paul Revere’s Midnight Ride
Flannel Is the Color of My Energy
Enemy of the World
Wasting Time (Eternal Summer)
We All Float Down Here
Get Out of My Head
Maniac (R.O.D.)
Brain Pain
Go Down in History
Heroes Get Remembered, Legends Never Die 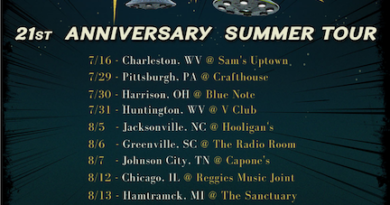 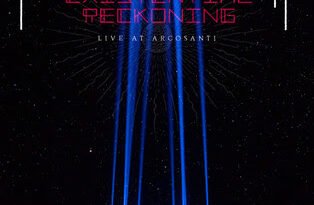 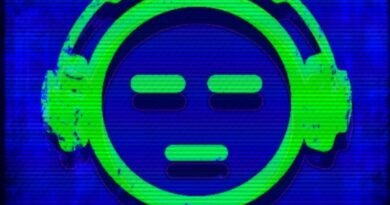 The return of… THE VERONICAS! New Single

22nd July 2020 Rob Cella Comments Off on The return of… THE VERONICAS! New Single