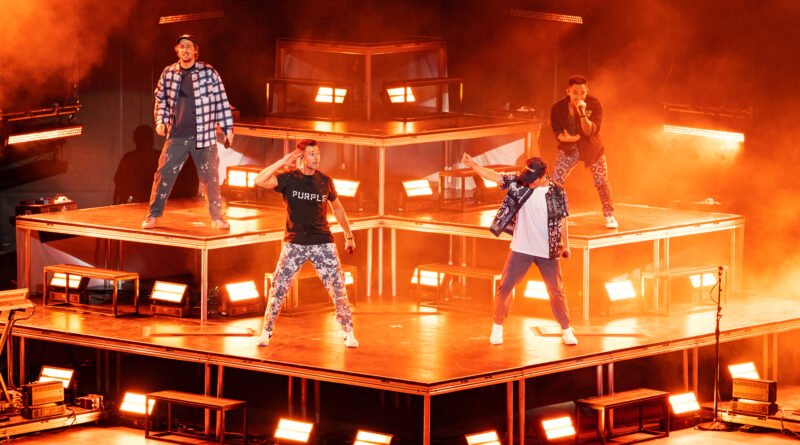 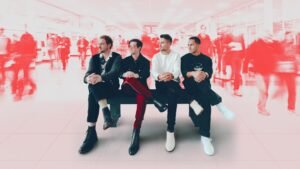 Big Time Rush, best known for their Nickelodeon TV show of the same name, played a 2-hour set to a sold out show in San Diego, California on August 12th. Following a 7-year hiatus after the show’s cancellation in 2013, the boys are back and better than ever. Members of the foursome Kendall Schmidt, James Maslow, Logan Henderson, and Carlos PenaVega brought their matured style and vocal range to the stage at the Cal Coast Credit Union Open Air Theatre at SDSU.
Opening for the band was Spencer Sutherland, a pop and R&B singer-songwriter from Ohio. You may recognize his music from the 2021 Netflix original movie Afterlife Of The Party starring Victoria Justice, where Sutherland portrays a fictional beloved pop star named Koop. With painted fingernails and high-waisted white pants reminiscent of Harry Styles’ fashion sense, Sutherland wowed the crowd with his soulful vocals and catchy lyrics. His setlist was filled with original songs and also included an impressive cover of Elton John’s “Benny and the Jets,” which suited his voice well. “I know this is a Nickelodeon household but who here is a Hannah Montana fan?” asked Sutherland. The crowd cheered. “This isn’t a Hannah Montana song,” he chuckled as the band began to play the title track off of his 2020 EP, Indigo. But he then surprised the packed amphitheater with a cover of Miley Cyrus’ “The Climb,” much to their excitement. He closed out the half hour set with a song called “Sweater,” which the singer claimed to be written about his ex-girlfriend.
Setlist:
Tell Me
Paranoid
Bennie and the Jets (Elton John cover)
Everybody
Indigo / The Climb (Miley Cyrus cover)
Chicken Little
Sweater
The Big Time Rush Forever Tour banner goes up across the stage as the stagehands and lighting crew get all the details ready. Girls line up by the dozens to take their picture with the sign before the lights dim and the amphitheater erupts with cheering fans. They open with “Windows Down,” an upbeat song with a definite party vibe. Next up was another track off of their 2011 album Elevate, “Music Sounds Better” which was followed up by their latest single, a funky song called “Honey.”
Every member of the band was grooving along and busting out dance moves, but Carlos especially seemed to get into the choreography. James mentioned that it was “good to be home” a few times throughout the show, as he grew up and attended performance schools in San Diego. The band continued through their set, alternating between familiar favorites from their Nickelodeon era and newer releases. They paused to teach the crowd a dance and introduce their next single, “Dale Pa’ Ya” which features vocals by Dominican producer and artist, Maffio. It was written earlier in 2022 during an album-writing trip to Miami, Florida and will drop on August 19th.
“No Idea” was a more mellow song that gave the group a chance to showcase their harmonies. Their four voices come together wonderfully, each one is distinct and easy to pick out in a mix. Logan and Carlos often carry the backing vocals and core melodies while Kendall and James deliver the higher notes. During “Confetti Falling” Logan busted out a drum with water on top for a bit of fun as a gentle rain of confetti fell into the crowd.
Next, the boys took a break from their own songs and sang a series of short covers accompanied by Carlos on the ukulele. After playing Backstreet Boys’ “I Want It That Way,” which the group jokingly referred to as “boy band inception,” perhaps the loudest cheers of the night came from the female-dominated audience when James took his shirt off during a quick cover of “Hot In Herre” by Nelly.
The band moved on to picking four lucky “worldwide girls” to bring up on stage as they sang one of their top-streamed songs, “Worldwide.” Logan then disappeared into the crowd and invited the rest of the guys to come join him. All four members (and several security guards) made their way into the stands to sing two songs, one of which was fan favorite “Paralyzed,” which remains unreleased on streaming services despite its popularity. Finally during their last song “If I Ruled The World,” large white beach balls were thrown into the crowd, painted with messages like “BTR <3 SD” and “BIG TIME RUSH.”
The crowd chanted “Big Time Rush!” and “Encore!” and the band quickly made their way back to the stage. Their encore included the Nickelodeon show’s theme song “Big Time Rush,” which brought on a wave of nostalgia for all the fans. Nearly every person in the venue took out their cellphones to record the well-known chorus for their Snapchat and Instagram stories.
Overall, everyone both on stage and in the audience was smiling and dancing for the entirety of the night. You can tell that this band loves what they do and are having a great time performing. Following their summer tour, you’ll be able to see Big Time Rush perform at the iHeartRadio Music Festival in Las Vegas on September 24th.
Setlist:
Windows Down
Music Sounds Better
Honey
Love Me again
Any Kind of guy
Amazing
Call It Like I See It
Dale Pa’ Ya
Show Me
Not Giving You Up
Halfway There
Stuck
No Idea
Confetti Falling
I Want It That Way / Cover Girl / Hot in Herre / Giant Turd
I Know You Know
Worldwide
Time of Our Life
Paralyzed
Fall
Boyfriend (Justin Bieber) / Party In The USA / Hit Me Baby One More Time / Never Gonna Give You Up
City Is Ours / Big Night / Til I Forget About You
Nothing Even Matters
If I Ruled The World
Big Time Rush
Boyfriend
Photos & Review by Marisa Glaser 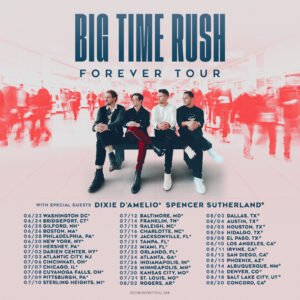 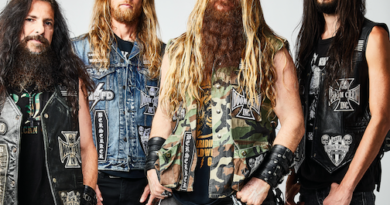 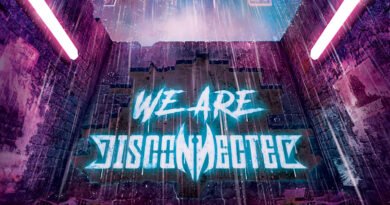 Correction: Roberto offers relief for stressful times with new song ‘Up in the Sky’

26th September 2020 Rob Cella Comments Off on Correction: Roberto offers relief for stressful times with new song ‘Up in the Sky’

MANTICORA Release Music Video for “Katana – Death of the Meaning of Life”, New Album ‘To Live To Kill To Live” is Out Now

10th November 2020 Rob Cella Comments Off on MANTICORA Release Music Video for “Katana – Death of the Meaning of Life”, New Album ‘To Live To Kill To Live” is Out Now