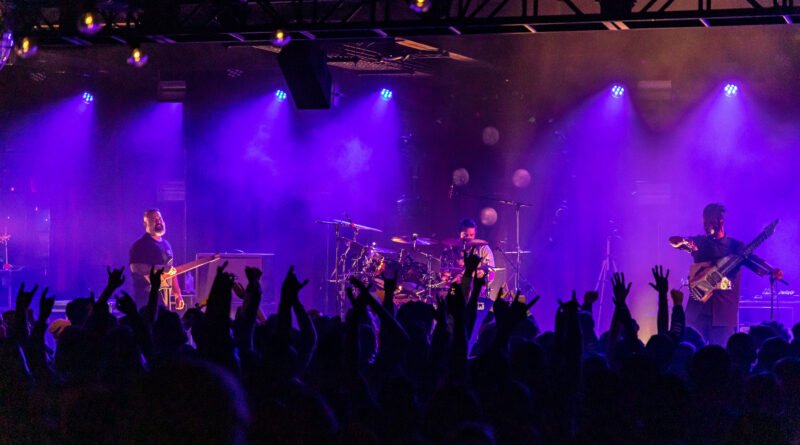 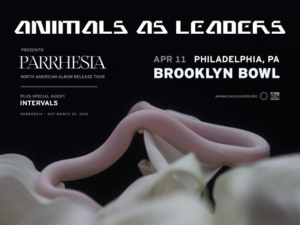 In 2009 Animals as Leaders burst onto the scene with their debut self-titled record and immediately made their mark with fans and the music industry.  Musical mastermind Tosin Abasi’s talents were the driving force behind the record’s success and has been revered by many of the biggest musicians around the world.  He was quickly joined by Guitarist Javier Reyes and the two have forged Animals as Leaders’ unique and intricate sound ever since.

In 2012 they recruited renowned Drummer Matt Garstka and this musically advanced trio have produced out of this world music with albums like The Joy of Motion, The Madness of Many and their latest superior offering Parrhesia.  Fortunately for the fans who are flooding the floor at Brooklyn Bowl in Philadelphia, there will be plenty of new music to be played.

While four lights begin to strobe across the stage the fans’ anticipation grows noticeably. And at the first sound from the stage the cheers almost drown out the distinctive opening of Tooth and Claw.  I want to say Animals as Leaders came out swinging.  But knowing how the setlist rolls out it’s safe to say that every song was a home run. After only a minute it’s hard not to be blown away by the musical abilities of these three as they play at such a high level.  They transition seamlessly through a maze of timing changes and tonal contrast from one part to the next.

Tosin Abasi would initiate the opening of the first of many new songs with the crushing Gordian Naught.  Its opening lead sounds like something out of the movie 300 that immediately gets your heart racing.  As the snare rolls keep coming the momentum grows and grows.  Soon it sounds like a slap bass shootout between Tosin and Javier as they effortlessly flow their fingers over their stings.  When the songs break down hits, the fans roar and the sight of the first mosh pit erupts and brings a noticeable smile across Abasi’s face from ear to ear.

With only a few seconds of down time Animals as Leaders would descend into another new track with Micro-Aggressions.  Right away it is just an onslaught of insane sweep picking paired with some of the most creative and furious double bass patterns I’ve ever witnessed.  I was able to somehow overhear a group of fans say that this was their favorite song off the album.  And as I watched on in amazement it was not hard to understand why.  As a musician it is very hard for me to even fathom how someone could create such a complex and layered piece of music like that.  But songs like this are what really set them apart from just about any other band out there.

The band would change up the pace when they lay out the softer sounds of The Price of Everything and the Value of Nothing off of their debut.  The diehards in the audience made their approval loud and clear as they got a chance to hear yet another track off of their groundbreaking album.  After Tosin and Javier trade licks back and forth, Abasi slides next to the drum kit to watch Garstka play an unbelievable assortment of fills and chops that fire off like an automatic weapon at a gun range.  Matt wasn’t even a quarter of the way through before the room erupt cheers, applause and a hand full of “FUCK YA!”.

Following the finger tapping ballet that made up Thoughts and Prayers, Animals as Leaders would pull a double play and stack that with another thrilling new track off of Parrhesia with Monomyth.  With red lights flashing around the stage like a laser field, Tosin unleashes the song’s galloping triplet intro onto the crowd.  They have such a knack for disguising brutal riffs and breakdowns under a layer of angelic leads and swift harmonies.

While the crowd’s ovation spills onto the stage, Abasi steps up to the mic and announces “We got one last song for you guys.”.  It didn’t take long to realize that Physical Education was going to be the exclamation of tonight’s show.  As Reyes plays the songs intro lead the fans engage right away and begin to mouth out the notes and rhythm while beams of purple and yellow lights shoot over their heads.  The song brought everyone in the room together and engaged with the band that once again put a big smile on Tosin Abasi’s face.  And when the song ends and the show comes to a close, every fan was left with the same reaction. 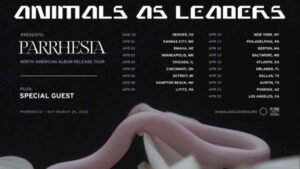 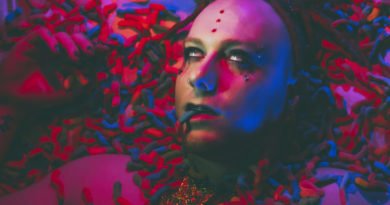 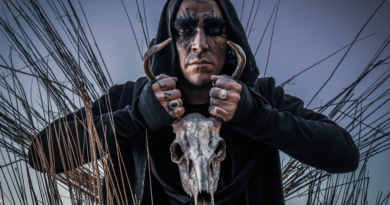 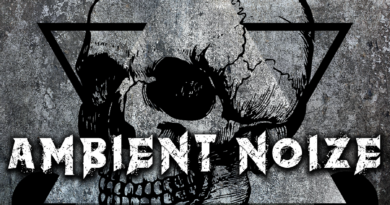