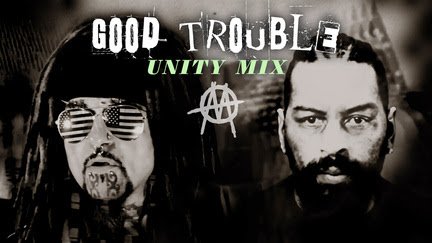 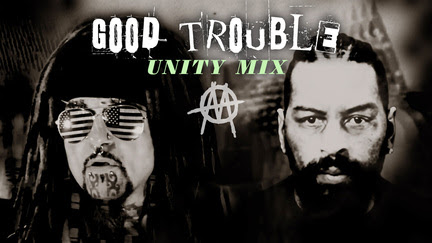 The passing of the late Congressman John Lewis on July 17, 2020 had a profound impact on Ministry creator Al Jourgensen and inspired the new song “Good Trouble,” at term often associated with the lifelong social activist work of the late Congressman who was monumental in the Civil Rights movement.
Today, in honor of one year since his passing, Ministry shares the new “Unity Mix” of the song that features N.W.A.’s Arabian Prince and guitarist Cesar Soto. This unedited version is meant to bridge the gap between Black and White and be a unifying call to arms to keep the fight for what’s right moving forward.
Find the video on the band’s social media accounts:
Facebook: www.Facebook.com/WeAreMinistry
Twitter: www.Twitter.com/WeAreMinistry
Instagram: www.Instagram.com/WeAreMinistry
Says Al Jourgensen of the intent behind the song, “If you look at the Emancipation Proclamation of 1863 and the Voting Rights Act of 1965, it took 100 years to actually make the unwritten Jim Crow laws of segregation illegal. And it’s now taken another 50 years to bring these issues to the forefront of consciousness again. Seeing the grassroots movements springing up in 2020 and continuing today, coupled with the legacy and loss of John Lewis, I thought it was time to put a voice to that. Human beings deserve the right to be human beings and seeing this massive groundswell fighting for equal rights inspired this song.”
Arabian Prince adds, “”Working with Al is always a blast, but this song is special as the powerful message must be magnified and spread across the globe. Just to read the words of John Lewis on video will be something I will remember forever. Thanks Al for allowing me to bless this song.”
Cesar Soto also says, “All the riffs that you hear in ‘Good Trouble’ were inspired by a reconnection that I’ve had not only with myself, but a reconnection with the universe through sobriety. Mix that with a country that was falling apart during a pandemic, and a home studio, and you have a winning formula and endless riffs. The song definitely means a lot to me and I can connect with it because I am a product of racial inequality. Being Latino, I’ve dealt with racism and still deal with racism, so I have a strong connection with the song.”
The special Unity Mix of “Good Trouble” is only available to watch/share on Ministry’s socials and will not be appearing on the upcoming Moral Hygiene release. It’s intended solely to be a tribute to the work, the legacy, and the words of John Lewis.
ABOUT MINISTRY
Born in 1981 in Chicago, Ministry has been the lifetime passion project of founder Al Jourgensen, considered to be the pioneer of industrial music. In its early days, Ministry was identifiable by its heavy synth-pop material in line with the new sounds and technology that were being developed in the ‘80s. Ministry’s output began with four 12” singles on Wax Trax! Records in 1981 before the first LP With Sympathy in 1983 via Arista Records. As time progressed however, so did Ministry, quickly developing a harsher, and more stylized sound that the band soon became infamous for on seminal albums Twitch (1986), The Land of Rape and Honey (1988), and The Mind Is A Terrible Thing To Taste (1989). With the release of Psalm 69: The Way to Succeed and The Way to Suck Eggs (1992), Ministry hit an all-time high in the mainstream musical realm and received its first Grammy nomination. In total, Ministry has been nominated for a Grammy award six times. Eight more albums would follow before an indefinite break in 2013, only to be unearthed again in 2018 with AmeriKKKant, continuing to reflect Jourgensen’s views on the frightening state of society and politics. Today, Ministry continues touring and recording with the brand-new 15th studio album Moral Hygiene to be released October 1.
Find Ministry Online
Website: www.ministryband.com
Facebook: www.Facebook.com/WeAreMinistry
Twitter: www.Twitter.com/WeAreMinistry
Instagram: www.Instagram.com/WeAreMinistry
Share This Post: 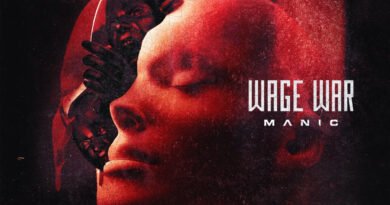 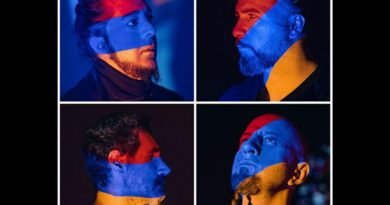 A Special Message from System Of A Down 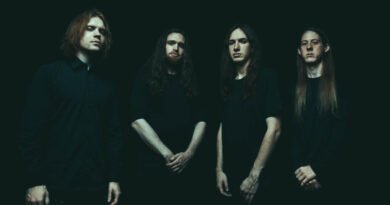