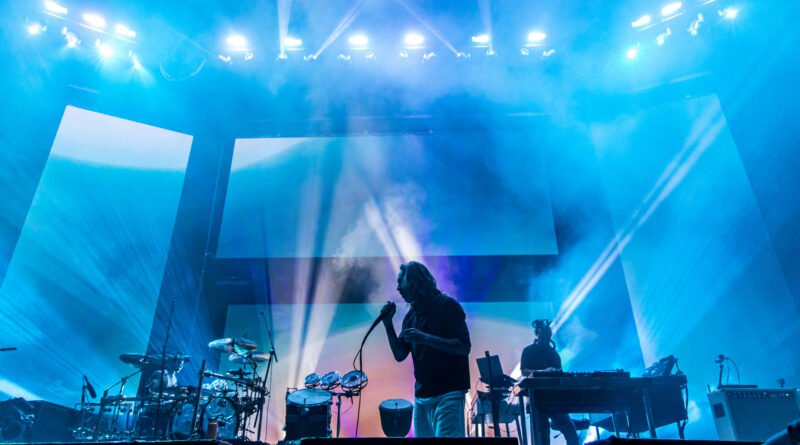 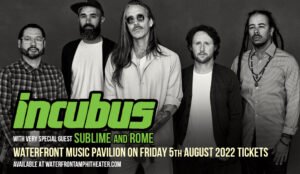 On July 24th, Incubus kicked off their summer march across the country, stopping at some of the biggest amphitheaters in the country.  This has been one of the most anticipated tours of the summer, and for obvious reasons.  Incubus will be making the triumphant quest with the upbeat sounds from The Aquadolls and of course, the iconic Sublime with Rome.  With a night jammed packed with incredible music, those in attendance tonight are sure to get their money’s worth.

By 6:30pm, the lines to get in are already wrapping around the riverside venue.  Those lucky enough to get in early are able to get settled in and relax before The Aquadolls hit the stage.  With reports of incoming lightning, the band’s Tour Manager hits the mic to announce that everyone on the lawn could move to the seats under the cover of the amphitheater.  As waves of fans storm the seats, The Aquadolls stroll out from backstage and are greeted with a solid ovation by the moving crowd.

The brightly dressed four piece waste no time as they cannonball right into the fun energy of Mine.  Their sound reminds me of the pop bands of the 80’s like The Go Go’s or Strawberry Switchblade where their catchy verses and punchy rhythms sink their hooks into you and won’t let go.  Guitarist Poli van Dam worked the stage with attitude and sass and at one point, ended up jokingly grinding while still jamming just over the head of a security guard as the crowd fed into her hilarious antics.

Singer Melissa Brooks’ soft but poignant vocals set the pace as it could go from subtle to in your face while the music behind her changes at the drop of a dime.  The Aquadolls laid out one rocking track after another with songs like Our Love Will Always Remain, Beachy, Take Me Away and a marvelous cover of The Go Go’s hit Vacation.  The band would wrap it up with their incredibly lively and free spirited Wander.

Our Love Will Always Remain

As roadies make sure all the equipment is in its right place and set up just right, the loud chants of “Sublime” roll through the amphitheater.  It wouldn’t be long before the stage glows with purple illuminated smoke, and the band takes the stage.  While everyone gets dialed in, Rome Ramirez struts out toting his Fender Strat to a huge wave of applause.  Wasting no time laying out the groundwork for Sublime’s tale of the disorder and lawlessness of the infamous L.A. Riots on April 29th, 1992.  Behind its reggae tones there was an animated depiction of the events from the fateful day.  There had been a visitor popping up during The Aquadolls set, and that sweet rottweiler hung out at the front of the stage and put on her own show for everyone.

Standing there just feet away and hearing that and then Smoke Two Joints was pretty surreal.  This was the first time I had ever seen Sublime with Rome and their energy, vibes and sound just took me right back to the first time I listened to 40oz To Freedom.  Something else that was reminiscent of the first time I listened to that record.  Rome looks out over the sea of fans and cracks a grin and after he looks back at the band he takes in the enormous cloud of herbal mist floating through the air.  He laughs and says “Aww shit.  That’s right. Jersey’s all legal now.”.  And judging by the fans’ reaction, they were happy to inform him.

The body of their set was nothing but one classic tune after another like Doin Time, Wrong Way and Pawn Shop.  Not only were Sublime with Rome telling their stories with their music.  But the large display behind the drum kit supplied more than enough visual context.  Like when they played Pawn Shop.  The screen would pan in and out from the front of a realistic shop and would rotate through objects you’d find inside. Following a smooth cover of Fishbone’s Skankin’ to the Beat, Sublime with Rome would serve up some of the biggest songs and fan favorites that they have to offer.

First up would be none other than What I Got.  Ramirez would call on the assistance of their Tour Manager to handle the workload on the acoustic.  Once they get going, that memorable guitar lead echoes through the venue as thousands sing along with every word.  They would follow that up with the reggae feels of the fun and body moving sounds of Badfish.  And what could be more fitting to wrap up an amazing list and a performance to remember, than with their legendary Santeria.  Throughout the night, the fans belted out every word from every song with ease.  But I think they gave this one a little extra and I can’t blame them one bit.

Wrong Way Wherever You Go

Skankin’ to the Beat

The familiar sounds of Dire Straits’ Money for Nothing start to pulsate out of the speakers as the lights go black.  The crowd cheered and chimed in.  Through the dark, Incubus starts to file in across the stage.  When the drum fills start the lights strobe in sequence, giving a fast glimpse of the band at every pass.  Soon DJ Kilmore’s scratch work lights the fuse until the band explodes into Nice to Know You.  As soon as the first note hits the entire crowd erupts but composes themselves enough for the “Hey” on Brandon Boyd’s que.

There is always an overwhelming presence when Incubus stands on that stage.  Between Boyd’s soulful vocals and the atmospheric sounds created by the rest of the band, there are few shows like it.  Through the mix of stellar songs (no pun intended) like Wish You Were Where, Anna Molly and Just a Phase, Incubus would break out a new addition to the tour’s set with the great Are You In?  Though the tempo is more on the mellow side, you could just feel it picking to the crescendo of Brandon’s exclamation.  The crowd’s powerful vocal backup really packed a punch behind Boyd’s.

Incubus would absolutely stock the middle of their set with amazing songs like Stellar, Megalomaniac, Echo and rounding off the block of hits would be none other than Pardon Me.  It’s pretty crazy that they could be heavy hitters like that and still have plenty left for the fans.  Drummer Jose´Pasillas and Brandon Boyd kickoff a powerful percussive performance before transitioning into the silky smooth sounds of the Lenny Kravitz classic It Ain’t Over Till It’s Over.  Couples were dancing together in their seats and out on the lawn, just soaking up the moment with a great soundtrack.

Soon, the stage glows red as Mike Einziger starts playing the intro to the heaviest song of the night with Vitamin.  That head nodding beat takes you right back to 1998.  Before the song’s breakdown, Boyd and Pasillas would be at it again.  This time in a friendly back and forth beat battle as the music hard stops around them.  Next, the venue echoes with the iconic whale cries of The Warmth.  The first time I ever heard this song, I just got lost in the music.  But every time I see it live, I’m blown away by the layers the Guitarist Mike Einziger is able to create as the song takes on a life of its own.

With so many incredible songs, the guess game was on as to how Incubus would wrap things up here at the Freedom Mortgage Pavilion.  Some may have guessed right and others not.  But no one was complaining when they got Warning.  There were a couple of times Boyd would let the fans take a verse for themselves and it was almost operatic having that many voices come together.

That group effort would come back into play when Incubus returned after a short break to deliver their brilliant aria Drive.  Every word out of Brandon Boyd’s mouth seemed to reverberate endlessly with the crowd’s help.  At one point the house lights came on, revealing almost 20,000 backup singers as Boyd serves as conductor.  The energy generator at that moment was incredible.  But it was a culmination of all of the unbelievable music and performance we witnessed tonight.  Incubus has without a doubt been one of the best and most consistent bands in the last twenty-five years and as we all just experienced, still puts on one of the best shows around!

Nice to Know You

Wish You Were Here

It Ain’t Over ‘Til It’s Over 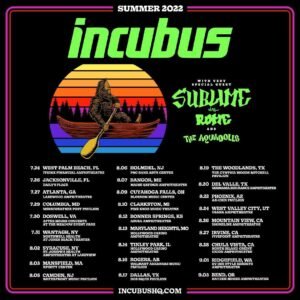 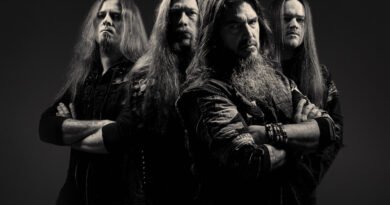 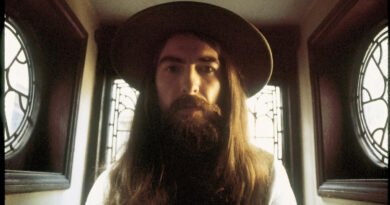 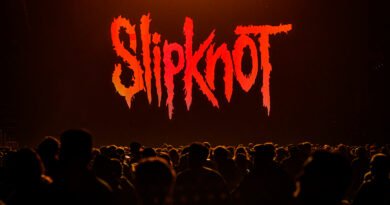