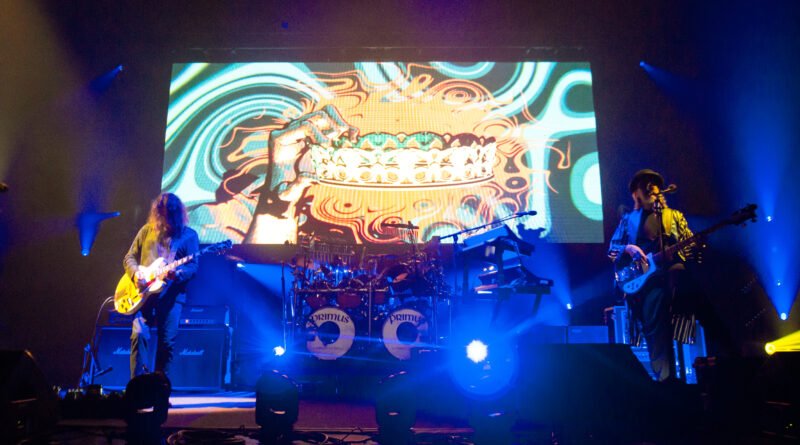 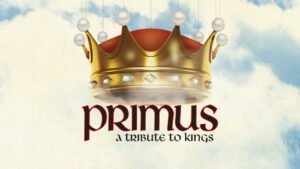 In 1977 Rush headed to Whales to record their 5th studio album A Tribute to Kings after touring the world on their acclaimed 2112 Tour.  The album would bring life to songs like Xanadu, the hit single Closer to the Heart, and the musical marvel Cygnus X-1 Book I: The Voyage.  The effect this album would have on a young Les Claypool would not only sit up there with his favorite Rush albums, but help shape his musical drive and vision.

Les had talked openly about the band kicking around the idea of covering Rush’s Hemispheres record, but would prove too difficult to recreate on stage.  A Tribute to Kings made more sense because not only was it the first Rush album he had ever heard, but Cygnus X-1 Book I: The Voyage is his favorite song.

After almost a year and a half and a few rescheduled dates, Primus have marched their way into Orlando to take over Hard Rock Live in front of a sold out crowd.  Armed with the hard hitting band The Sword and a setlist compiled of killer originals and of course their tribute to Rush, Primus will make up for lost time and show their fans why this show has been worth the wait.

For the average concert goer, the shows they might attend would probably hear the crowd chanting the name of the band in hopes to get them to the stage.  Primus fans take a different approach and chant out “PRIMUS SUCKS” like they were taunting the visiting team.  Not long after, the house lights drop and the hauntingly familiar sounds of Clown Dream from Pee Wee’s Big Adventure start to give everyone flashbacks of the horrific clown scene from the movie.

Guitarist Larry LaLande waves to the crowd as he makes his way out to the mic shortly before Drummer Tim Alexander squeezes through what could pass as one of Neal Peart’s kits.  There would be about a 30 second delay, before the LED fret markers of Les Claypool’s Pachyderm Bass could be seen floating through the darkness and smoke.  The crowd grew more and more animated as each member made their presence known and once the band got settled in,

Larry starts to create that intro that fans know all too well.  With his guitar work mimicking the towers of yellow lights, Les begins thumbing away with his unique vocals intoxicating the crowd.  But when the threesome drop in together, the blue collar tweaker himself appears high above the band sending the crowd into an enthusiastic frenzy as they jump and dance.  As Primus knocks out one iconic song after another including The Toys Go Winding Down, Frizzle Fry and Tommy the Cat, it would be the sight of three cheap plastic cowboy toys that would send them screaming with excitement.

Wynona’s Big Brown Beaver’s signature cowboy yodel echoes throughout the room as the video itself plays in unison across the stage monitor.  The song’s notorious rhythm is impossible not to get you moving which is very evident as you look down onto the floor and see fans hurdling in every direction. Even after all of these years you can’t help but laugh when you watch Tim’s frustration trying to shoot that bottle.  After two stellar solos by Larry LaLonde and a couple of snare rolls by Tim Alexander, this fabled song ends as suddenly as it had started.

As the song ends the fans begin a “USA” chant at which Les Claypool would oblige them with a few bars of our nation’s anthem.  He would jokingly address them with ” The Canadian National Anthem ladies and gentlemen.  That will actually tie in with our second set of the show where 3 American guys play the songs of 3 Canadian guys”.  With the room still full of laughter Primus would jump right into the ferocity of Professor Nutterbutter’s House of Treats.  The band’s deranged thumping medley would send Claypool into a tailspin around the mic as the menacing cartoons grin down upon everyone.

Following the musical phantasm it wouldn’t take long for one of the most recognizable bass riffs of the last twenty-eight years to come blasting out of the speakers.  My Name Is Mud incited a couple mosh pits as most head banged and threw their hands in the air in sync with Les and Tim’s seismic tempo.  At the first syllable, the sold out crowd gave it all as they belted out every amplified word back to the band.  The energy and exhilaration was at its peak for the show as the ovations towered over the band as Larry started to wrap up his solo and Les walked to the edge of the stage to gaze upon the sea of fans while he punches away at that legendary outro.  That would wrap Primus’ amazing first set of the night. But there was plenty of music left in the night.

When the band returned after the intermission, the sounds of the acoustic intro from Rush’s A Tribute to Kings may have had fans thinking it was just a sound clip.  But a single yellow spot light reveals Larry LaLonde playing on a mounted acoustic guitar as Les Claypool can be seen wearing a silk robe and toting a black Rickenbacker bass, both in homage to the great Geddy Lee.

As the band dive in, an animated hand holding a crown rotates on the projection screen.  After a couple seconds of admiration from Les, he soon turns away from the screen to the mic in order to deliver the first set of Rush lyrics of the night.  You could hear the extra thrill from the audience because as many Primus fans in attendance, there is also an abundance of Rush fans as well.  But both sides are in for a real treat tonight.

Coming in after the dual double neck attack throughout Xanadu, Primus begin their execution of probably the most well known track off the album with Closer to the Heart.  The sounds of an angelic 12 string invoke quite an acclimation and for good reason.  From LeLonde’s guitar work, Tim’s bell hits and Les’ “Geddy” range it truly made this remarkable rendition.  With the last couple verses of the chorus being played as the song winds down, Les Claypool gives the fans a couple of cracks at it in between his own contributions. 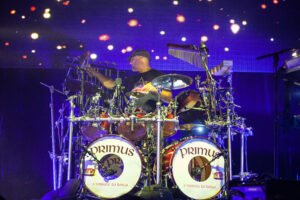 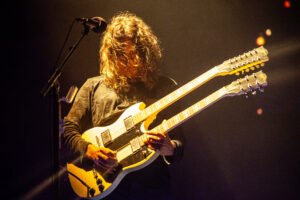 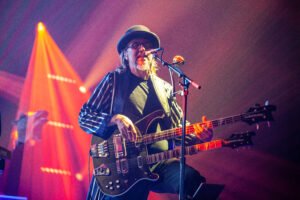 After the song, Les recollects with the crowd being 13 and drinking warm beers before his first Rush show on the Hemispheres tour.  As he looks around the room he cracks a smile and says “So I’m going to take a guess. A gander.  That there are some Rush fans here tonight” and everyone assured him with a thunderous ovation that indeed they were.

Following the wizarding tracks of Cinderella Man and Madrigal, Primus set their sights on the final and probably most complex track Cygnus X-1 Book I: The Voyage.  The galactic sequence of the U.S.S. Rocinante roaming endless outer space displayed above the drum kit has the band’s attention as Les plays that signature opening riff.  The action on the screen intensifies with the jam on stage as Primus knocks out section after section with Rush-like precision.

Their playing could only be rivaled by Rush themselves as us mere mortals look on in total disbelief at their skill set.  You could see the joy on Les Claypool’s face as he played through his favorite song and when it concluded, the fans shared their own elation and stamp of approval with their eruption of applause.

With a full set of Primus songs in the books and the dust barely settled from a faithfully recreated Rush record, most including myself would start making our way to the door.  But that would simply not be the case as Les and the boys decided to hang around and keep the party going for a couple more.  As Les stands by his mic the floor fan elegantly blows his robe back as he slaps along on his 6 string.  But within just a few notes fans everyone is overjoyed when they hear Over the Electric Grapevine.  The soothing bass riff is shortly met by Larry’s wah-wah saturated solo which looks to have peeked Les’ interest.  He soon walks out and the two have a friendly 6 string dual for the fans’ enjoyment.

Without skipping a beat Primus would begin to tell the tale of a failed fast guy behind the wheel with the classic Jerry Was a Race Car Driver.  The fan favorite gets the energy popping once again and when Les announces “GO” it sets off the chaos on the floor as it closely resembles the cars going around the dirt track in the video.  To bring this evening to a close, Primus would grab another song off of their brilliant 1993 record Pork Soda.  The somber story of Bob is an unfortunate true tale about a personal friend of Les Claypool who had hanged himself in his own apartment.

After the galactic sounds of the last song of the night, Les releases a sinister laugh into the mic and the band wraps back to close out Jerry Was a Race Car Driver.  When the lights go dark the crowd explode into a defining acclaim and when the house lights come one, there isn’t a single person still in their seats. 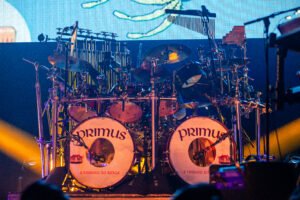 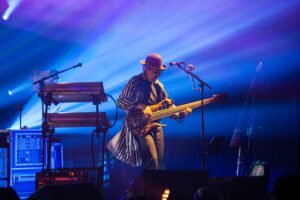 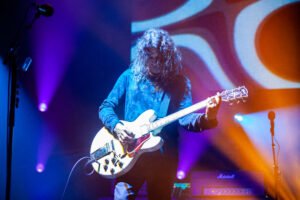 With any Primus show you are guaranteed to get a unique musical experience from some of the most eccentrically talented musicians in the world and this tour would certainly take their live show to a different place.  The first half of the show Primus served up some of their fan favorite hits covering almost 30 years of their career.  The fans were treated to not only the band’s signature sound but amazing visuals to accompany the music.  For the Tribute to Kings portion of the night, not only did Primus do an amazing job recreating that iconic album.

But the attention to detail that the band put into their performance really brought it home.  From the band using authentic instruments that Rush had used to really achieve the original tones from the record, Les Claypool’s wardrobe changed to Tim Alexander’s colossal Neil Peart inspired drum kit.  This is not a tour you want to miss.  So make sure you get your tickets and VIP packages for Primus’ A Tribute to Kings Tour while they last! 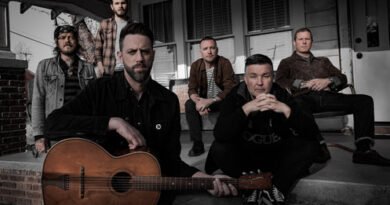 Dropkick Murphys “All You Fonies” Single And Video Out Now; Pennywise Announced As Very Special Guest For 2023 DKM European Tour 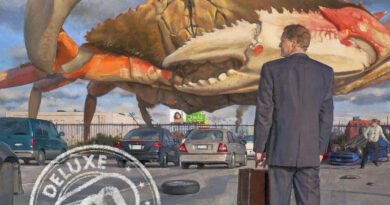 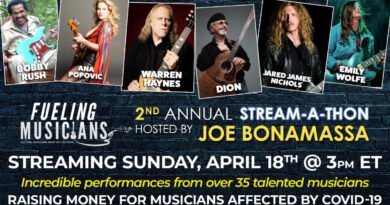