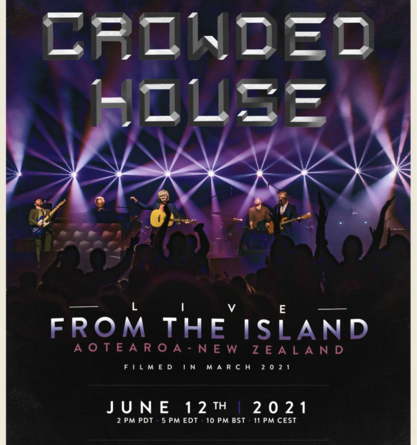 Crowded House: Live From The Island

With 10 million records sold and legendary hits like “Don’t Dream It’s Over” and “Something So Strong” that have dominated pop culture since the ‘80s, iconic rock band Crowded House celebrates their incredible career with a brand new streaming event.

Crowded House: Live From The Island was filmed in front of a live audience in March 2021 in Auckland, Aotearoa – New Zealand and will be available for fans to watch starting Saturday, June 12 at 2:00 PM PDT / 5:00 PM EDT / 10:00 PM BST / 11:00 PM CEST. It will also be available on demand for a week, through Sunday, June 20 at 11:59pm EDT. The show was one of the first full capacity sold-out arena performances by an international artist since COVID.

Tickets for this special online event are now on sale at www.CrowdedHouseStream.com starting at $14.99, with a variety of exclusive merchandise available for purchase. Australia and New Zealand fans can purchase their stream tickets and bundles at eMusic Live, HERE.

“We were truly blessed to be able to play 12 real live gigs in New Zealand, the band together after a year of lockdown, sensing the occasion and playing as if everything was brand new and full of wonder,” says Neil Finn. “We can’t wait to share this beautifully captured performance from Auckland with our fans around the world in anticipation of being on the stage for them in person once again.”

The band, comprised of Neil Finn, Nick Seymour, Mitchell Froom, Liam Finn and Elroy Finn, will showcase tracks from their new record Dreamers Are Waiting (out June 4 via BMG), including singles “Whatever You Want,” “To The Island” and “Playing With Fire” alongside their legendary catalogue – “Something So Strong,” “Don’t Dream It’s Over,” “Mean To Me,” “World Where You Live,” and more. About Crowded House: Crowded House is a long standing and much-loved vehicle for the song writing talents of Neil Finn. Formed in Melbourne Australia in 1985 out the ashes of New Zealand’s Split Enz by Neil, Paul Hester and Nick Seymour, their eponymous self-titled debut album on Capitol Records went on to global success with the hits “Don’t Dream It’s Over” and “Something So Strong”. Those songs and many that followed are still resonating with audiences today, the former in particular being one of the most covered songs of the last 20 years. The band’s first incarnation lasted from 1985 through 1995 with 4 studio albums and enjoyed much success worldwide, becoming particularly beloved for their freewheeling and interactive live shows. This lineup said Farewell to the World on the steps of the Sydney Opera House in 1996 with a now legendary performance in front of 150,000 people.

In 2005 following the tragic death of Paul Hester, Neil and Nick felt emotionally compelled to bring Crowded House back, to put some more good history, as they described it, into the story of the band.  Drafting in new drummer Matt Sherrod and with long time touring member Mark Hart they released the album “Time On Earth” to critical acclaim and toured the world. Another album, ‘Intriguer”, was recorded in 2009 and Crowded House was inducted into the ARIA Hall of Fame in 2016, at the same time reprising its Farewell shows at the Sydney Opera House with 3 nights of stunning performances. Find Crowded House media assets HERE.

About Danny Wimmer Presents: Since 1995, music industry veteran Danny Wimmer has been producing concerts and festivals, both large and small. In 2011, he formed Danny Wimmer Presents, which now produces several of the largest rock and alternative festivals in the U.S. By combining A-list talent with local cuisine and culture, DWP has become recognized within the industry for delivering the highest-quality entertainment experiences to fans, artists, sponsors, partners and host cities. DWP creates memorable and all-encompassing festival experiences, leaving both consumers and partners with lasting and meaningful impressions. DWP will continue to add new music festivals to its already stellar portfolio, which currently includes Aftershock, Bourbon & Beyond, Epicenter, Hometown Rising, Louder Than Life, Sonic Temple Art + Music Festival, and Welcome To Rockville. Previous DWP festivals include Rock On The Range, Carolina Rebellion, Northern Invasion and more.  In 2020, DWP launched the popular digital series Offstage with DWP and Behind The Barrel, and ventured into the digital content curation space, promoting pay-per-view live streams. 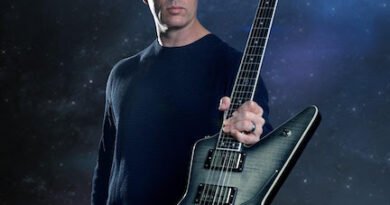 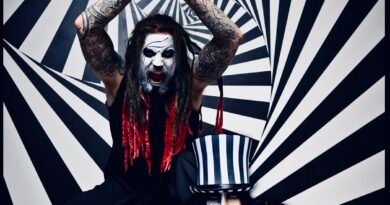 RAVEN BLACK Revels in Brutal Metal Cover of iconic NIGHTMARE BEFORE CHRISTMAS Opening “This is Halloween”!

1st November 2021 Calypso Dread Comments Off on RAVEN BLACK Revels in Brutal Metal Cover of iconic NIGHTMARE BEFORE CHRISTMAS Opening “This is Halloween”!