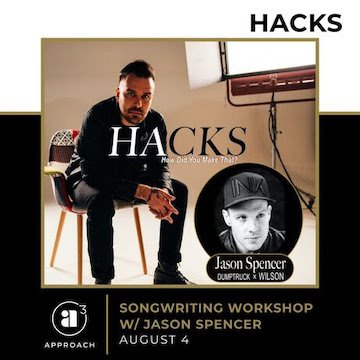 ‘HACKS: How Did You Make That?’

In Partnership With A3 Artists Agency & Fundo

Shinedown’s “How Did You Love” With Songwriter Scott Stevens,

Nickelback’s “For The River” With Producer Chris Baseford,

Multi-talented music artist / personality Chad Nicefield (Wilson, Chaddy Daddy) debuts his weekly live streamed songwriting workshop HACKS: How Did You Make That? on Tuesday, August 4 at 4:00 PM PT / 7:00 PM ET in partnership with A3 Artists Agency’s “A3 Approach” and Fundo.

The debut episode of How Did You Make That? features Chad’s former bandmate, songwriter/guitarist Jason Spencer of Wilson, discussing the group’s hit song “Dumptruck,” which has more than 10 million streams on Spotify.

Upcoming episodes include Shinedown’s “How Did You Love” with songwriter Scott Stevens, Sammy Boller’s “Cloak Of Light” with the guitar virtuoso himself, Nickelback’s “For The River” with producer Chris Baseford, producer Steve Evetts, Motionless In White’s “Thoughts & Prayers” with songwriter Tom Hane, and many more.

Each installment of this weekly series hosted by Nicefield is limited to 35 participants, offering exclusive access to some of the top songwriters and music producers discussing their creative process. Tickets are priced at $15 and proceeds will be donated to NIVA (National Independent Venue Association) aligned charities established to help artist crew members, music venues and venue staff who have faced serious hardships due to the COVID-19 pandemic. One charity will be chosen by the guest each week.

HACKS: How Did You Make That? takes participants on a live virtual ride alongside the creative mind(s) behind the music and art they love. HACKS… will offer an unparalleled, exclusive look behind the scenes, explaining the making of the hit song featured in each episode.

Nicefield explains, “From the initial spark of creativity all the way through the guts of its birth, we’ll provide a deep look inside the raw materials used to create the art as we walk fans through how it became what the world knows it as today.” Emphasizing the program’s support of the music community, he continues, “Help those who create the music and art we love get the assistance they so desperately need by asking, ‘How Did You Make That?’“

During the workshop, audience members will interact with Nicefield and the guest via video and will be able to ask questions during the live stream.

For more details and to purchase tickets for upcoming workshops, visit: https://fundo.area120.com/hacks/#/home

The current list of upcoming episodes for HACKS: How Did You Make That? hosted by Chad Nicefield is as follows:

HACKS debuts with a deep dive into the process of writing Wilson’s song “Dumptruck.”

Scott Stevens (songwriter) – Shinedown’s “How Did You Love”

Delve into the process of writing Shinedown’s “How Did You Love” with guest Scott Stevens, the hit songwriter responsible for co-writing songs from bands like Shinedown, Halestorm, Highly Suspect and many more.

This live workshop presentation with guest Sammy Boller, the guitar virtuoso and songwriter known for his solo work and with the band Citizen Zero, explores his guitar playing and writing process on his song “Cloak Of Light.”

Chris Baseford is a producer for acts like Nickelback, Rob Zombie, Avril Lavigne and many others. He’ll discuss his process of producing Nickelback’s hit “For The River.”

Producer Steve Evetts will discuss a song to be announced soon. Evetts is known for his work producing bands such as The Dillinger Escape Plan, Every Time I Die, Symphony X, The Cure, Saves The Day, He Is Legend, and Sepultura, among others.

Songwriter Tom Hane has co-written hits from acts like Motionless In White, Love & Death and others. HACKS will be diving deep with Tom into his process in penning Motionless In White’s “Thoughts & Prayers.” Tom is also known for his tenure behind the drum kit with In This Moment during both the Blood & Black Widow record cycles.

About Chad Nicefield: He’s a singer, a showman, a songwriter, a frontman, a host, a musician, a personality, a producer — but most of all, he’s an entertainer of the finest order that always leaves ‘em wanting more. As the lead singer of Wilson, Chad brought his wild, passionate, tongue-in-cheek and fun-loving spirit to audiences all around the globe, whether through the band’s music, producing/directing their music videos, or their raucous live performances. His honest desire to leave people with smiles on their faces resonated with fans and peers alike, resulting in many opportunities to let his personality shine outside of Wilson as well. For example, Chad was tapped to be the official host of the music cruise ShipRocked, as well as their new Making Waves podcast/livestream, interviewing fellow artists. He’s also been cast as a featured actor on the Comedy Central show Detroiters, and is the creator of the podcast series Hacks: How Did You Make That?, a live streamed writer/producer workshop that will feature songwriters and producers discussing their creative processes. As an experienced talent buyer for The Crofoot Presents in Detroit, MI, Chad has been fortunate to witness inspirational and life-changing performances from many of the greatest musicians and comedians from all over the world. This, and his natural thirst for knowledge and learning, have allowed him to further develop and hone his own hosting and comedy chops – he even served as co-producer for Dan Cummins’ Amazon stand-up special Get Outta Here; Devil!. Chad even has his own popsicle brand in the works — Nice-icles. 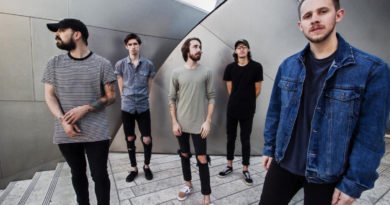 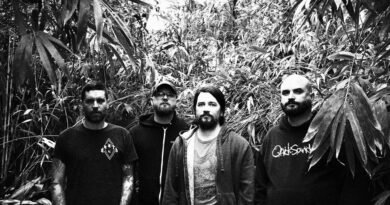 HORSEWHIP: Florida Hardcore/Crust Outfit With Members Of Reversal Of Man, Combatwoundedveteran, And More To Release Laid To Waste LP Via Roman Numeral Records And Financial Ruin

21st August 2020 Rob Cella Comments Off on HORSEWHIP: Florida Hardcore/Crust Outfit With Members Of Reversal Of Man, Combatwoundedveteran, And More To Release Laid To Waste LP Via Roman Numeral Records And Financial Ruin 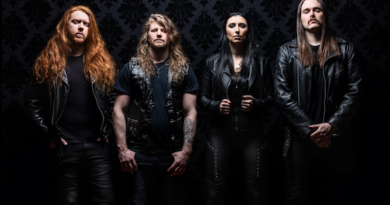 GWAR to Release 30th Anniversary Editions Of “Scumdogs of the Universe” October 30th!

9th August 2020 Rob Cella Comments Off on GWAR to Release 30th Anniversary Editions Of “Scumdogs of the Universe” October 30th!